If you live in a condominium, co-op, or gated community with shared spaces such as lobbies, hallways, sidewalks, basements, elevators, plumbing, sewerage, roofs, and parking lots, and you own your apartment or townhouse, you almost certainly belong to a Homeowners’ Association (HOA). The HOA is responsible for maintenance and repairs of the common areas, debts, taxes, and other financial obligations of the real estate that HOA members own in common. The HOA board also determines how much homeowners pay in fees each month (referred to as monthly maintenance) and how much members are assessed in the event of a significant expense that is out of the ordinary, such as a new roof, broken sewers, and drainage, or new paving for a parking lot.

The HOA’s Board is composed of homeowners elected to serve for one or two years. Generally, the Board selects a property manager to maintain the areas of common interest and gets its members’ input on what to do with the shared spaces, and whether services performed by its vendors are satisfactory. The Board has a fiduciary responsibility to its members for the HOA’s expenditures. It includes the contracts that the HOA enters into, the payment of taxes, insurance, legal fees, landscaping, snow removal, etc.

To protect the HOA’s interest, a certified public accountant monitors the use of the funds on behalf of the common interest real estate association by conducting an annual audit of the HOA’s books. It reports it’s finding to the Board and membership of the HOA.
In general, a well-run HOA board will hire an auditor with experience working with common interest real estate associations and their boards. It is an essential point because board members of HOAs may not have a background in business. They have other responsibilities outside of the property and may not understand what to ask or look for in an organization’s books.

A good auditor will know what to look for in the HOA’s books to confirm that goods and services were performed correctly, and the fees paid were reasonable and customary fees. They will report their finding to the Board and members of the HOA and explain its findings in everyday language, offer suggestions to improve reporting, and suggest ways the HOA can save money in the future. In other words, a good auditor is an excellent investment for an HOA.

Special Relativity embodies revolutionary concepts which defy our way of thinking. We know there is no limit to speed. Whoever runs fast, someone else will run faster. Wrong, there is a limit: the speed of light. The speed of light matters where one would not expect it to have any relevance. It is present in the equations computing energy as well as distance. And, finally, we all know that one minute has been and will be one minute everywhere and always. Here, we find out  that, at speeds approaching the speed of light, it is not.

Everything in space is in motion. Special Relativity envisions observers throughout space that are moving as well, but consider themselves at rest in THEIR frames of reference. The frames are a set of coordinates, x, y, and z with the observer at the origin, x = y = z = 0. The coordinates permit the observer to locate and monitor events of motion anywhere in space.

Special Relativity refers to frames of reference in space that are inertial, i.e. all events take place at constant speed, rather than accelerating. For simplicity, we are assuming all these events to take place either on, or parallel to, observers’ x axes.

Special relativity is concerned with how an observer in one frame of reference views events taking place in another. Why is this important? An astrophysicist, for example, may want to know how his observation on earth of an event occurring on a  star compares to that witnessed by an observer on the star.

In this context, I am an observer on earth and, in my frame of reference, I am observing an airplane traveling at a fixed altitude, at speed v, parallel to my x axis.

The airplane captain marks a distance d on the floor of the airplane in the forward direction. In his frame of reference it’s a fixed line from x = 0 to x = d. In mine, on earth, segment d, will move, along with the airplane at speed v parallel to my x axis.

The captain will then release an electric train traveling at speed e along segment d, covering it in time t = d / e. I will observe that event as a train moving with segment d at speed k = e + v, reaching the end of d in time t after launching. In the transfer of data, d and t have not changed, but the speed of the train has increased from e to k.

The captain then turns on a flashlight. Its photons, travel at the speed of light, c, along segment d. In my frame of reference, as above, I would expect the photons to travel at a speed c + v.

We now have a problem: All experimental evidence indicates that, in any inertial frame of reference, the speed of light, c, roughly one billion ft/sec, is a universal speed limit that is never exceeded. Here, c + v exceeds it, which means, there is something wrong with the way we transferred the data.

Special Relativity tells us that, at speeds approaching the speed of light, Newtonian physics, which we have been taught in school, no longer applies. In transferring data between frames of reference at those speeds, not only will d have to change, but, surprisingly, t as well. That is, totally, foreign to our experience, since we consider time to be invariable under any conditions.

After of a lot of boring algebra, it turns out that the d and t in the airplane’s frame of reference wind up d’ and t’ in my frame of reference on earth. It is remarkable that d and d’ and t and t’ are related by the same correction factor.

The correction factor f, will vary between 0 and 1. 1, means no correction at “normal” speeds, i.e. speeds way below the speed of light, c.

I would have expected the captain’s clock on the airplane to read the same elapsed time as my clock on earth. Now it won’t. In fact, the Captain would continue to be 13% younger than he would be on earth if he had sped up the plane to, say, half the speed of light.

A mass, m, may also be transferred between frames of reference as do speeds, subject to the same correction factor:

where E is the energy of mass m at rest.

2.2 pounds (1 kg) of oranges on a supermarket shelf contain 25 million megawatt hours of energy which is more than the yearly total energy generation of the state of New Hampshire.

As mentioned above, when an object moves at a speed approaching the speed of light, its mass at rest, m, will increase to m’.The energy attributed to this increase, m’c² – mc² , is known as the relativity kinetic energy, KE. At a speed of 0.866c, KE = E, i.e. m’ = 2m.

Where did KE come from? It was contributed by forces that accelerated the body from rest to its high speed.

It may be shown that, at low speeds, KE becomes the familiar ½mv².

An air-conditioner fills two functions: Cooling and dehumidifying the air.

The air conditioner fills these functions using a number of components, interconnected by pipes in a closed loop. Within the pipes circulates the refrigerant which is then processed by the compressor, condenser, expansion valve, and evaporator in, what is called, the refrigeration cycle.,

Cooling occurs at the evaporator in which the cold liquid refrigerant is converted into a gas. This process requires heat from the surrounding warm, moist air and therefore cools it.

Humidity is removed by the condenser in which the gas refrigerant is converted into a liquid. This process releases heat to the surrounding air. When the humid hot air comes in contact with the cold surface of the condenser, condensation takes place. The water vapor turns into water droplets which are collected and removed from the air conditioner through a pipe.

They are physically identical coil structures made out of either copper or aluminum.

The function of the Compressor is to circulate the refrigerant. and raise the pressure and temperature of the gas before entering the Condenser.

The Expansion Valve lowers the temperature of the liquid refrigerant entering the Evaporator.

For maximum performance, the refrigerant liquid should be as cold as possible, which means a low BP (Boiling point). Another consideration is low GWP (Global warming potential). Currently used refrigerants are HFCs (hydrofluorocarbons) R-32 and R-410A. Their specs are

A heat pump functions as either a cooling or heating device. One way of switching from cooling to heating is to reverse the flow of the refrigerant. The functions of the condenser and evaporator will then be interchanged. The evaporator becomes a condenser, heating instead of cooling the air. 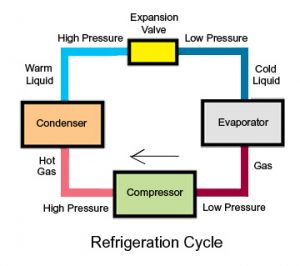 The modem accepts the incoming U-verse signal and processes it to supply analog voice signal to the phones and Ethernet ADSL to the computers.